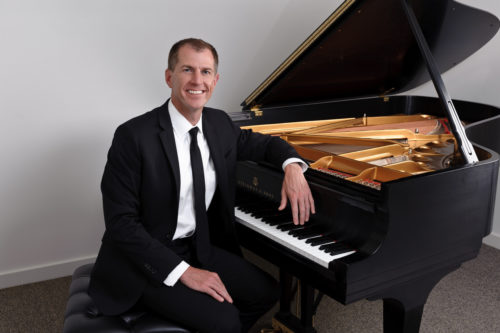 Andrew Todd enjoys a diverse career as a non-profit executive and a concert pianist. He continues to perform solo recitals and chamber music across the country. A native of Ohio, Andrew holds degrees from Northwestern University, the Mannes College of Music, and the University of Colorado.

At age 17, Mr. Todd made his orchestral debut playing the Schumann Piano Concerto with the Columbus Symphony and has since appeared with the Aurora and Littleton Symphony Orchestras, Park Ridge Civic Orchestra, the Boulder Chamber Orchestra, and the University of Wyoming Symphony. During the 2017-2018 season, he was the featured soloist for the Wyoming Music Educators Annual Conference and the Wyoming Arts Council’s 50th anniversary concert.

As a winner of the Artists International Piano Competition, Mr. Todd’s New York debut was at Carnegie Hall’s Weill Recital Hall. In addition to Carnegie Hall, his New York appearances also include the Polish and French Consulates and Steinway Hall.

He has released three CDs, which are available on iTunes, Amazon, and CD Baby. His newest album released in December 2019 featuring works by Haydn, Berg, and Schumann.

Mr. Todd lives in Jackson Hole and has a 17-year old son. A former professional soccer player, Mr. Todd was Captain of Northwestern University’s Varsity Soccer Team. In his free time, he enjoys skate skiing in the winter and trail running in the warmer months.